Sermon for the Fourth Sunday of Advent. Church of the Holy Apostles, NYC. December 23, 2012 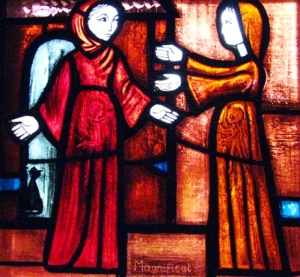 The pregnant teenager left town and went into the country to spend some time with her cousin, who is described as being “advanced in years” and was probably in her forties. Mary’s cousin Elizabeth was also pregnant.

Today is the final Sunday of the season of Advent—the season whose theme is expectation. That expectation reaches its appropriate culmination in the meeting of these two pregnant women. Elizabeth is the prophet—she speaks: “Blessed are you among women, and blessed the fruit of your womb. And why has this happened to me that the mother of my Lord comes to me?” Without any further evidence, but the baby in her own womb kicking, Elizabeth sees what God is doing with Mary and she gives name to it.

Later generations would call Mary the Theotokos—the God-bearer. It is her song that interprets the expectation given voice by Elizabeth and the hope of all generations to come. The song is well known—at General Seminary we sing it every day at Evensong. The first word of the Latin version is ‘Magnificat’ and it is an entire genre in sacred music. We do well to attend to this text—its clear meaning can be surprising.

Like the Hebrew poetry of the psalms, Mary’s song develops in verses where the second line parallels, expands or contrasts with the first. “My soul proclaims the greatness of the Lord.” followed by “My spirit rejoices in God my savior.” It is indeed a great song of praise, but for what is God being praised?

The song begins close to home; referring to Mary, the singer, but throughout it expands wider. “He has looked with favor on his lowly servant.” This is a line which has tempted many interpreters to read it as a song of humility, of acceptance of one’s low station in life without complaint. But that’s not how the song develops.

Mary is speaking of her expectation of what God is doing with her means and will mean. Boldly she says: “all generations will call me blessed; the Almighty has done great things for me.” This is a song that turns our ordinary assumptions upside-down. Certainly in our own day, it is common to hold up the wealthy and powerful as the exemplary people, even as those favored by God. But the song then follows that God: “scattered the proud, cast down the mighty and sent the rich away empty.” Mary expects God to fill the hungry with good things, lift up the lowly and have mercy on those who fear him. The conclusion of the song links these sentiments with God’s help for the children of Abraham.

Given that, one could reasonably say that the Magnificat is more political than pious—it presents a vision of a world in which privilege no longer holds and power is overturned by the love of God in the real world where people are hungry, and frightened and intimidated. Mary was among those who were in a position of weakness, both economically and politically, in the Roman Empire. Yet she had experienced God’s loving intervention and it made her bold and not fearful at all. That’s pretty miraculous, that someone in such a precarious position would not be afraid of losing the little that she had, but instead reach out in generosity and proclaim with confidence a transformation of this world.

Now the special thing about Mary is that she knew the love of God. The love of God come among us is the miracle. God’s love is here and available for us all. All of us are called to the same generosity of spirit as Mary…and we look with the same hope that she had. Let’s not kid ourselves, the things we decide to do don’t accomplish a transformation of the world; they don’t solve the problem of hunger; they don’t eliminate oppression and inequality. With Mary we are called to witness and proclaim the love of God—the scary, upside-down-turning love of Mary’s song and of her son Jesus.

Our Advent expectation is of the coming of a God whose mercy is not passive—rather God’s mercy shatters injustice. Mercy doesn’t mean that God says, “oh, that’s ok”, when people hurt others, when we make lethal weapons easier to get than an oversized soda. God’s mercy is that he picks up the lowly, and comforts those who mourn. Things like inequality, oppression and violence will still be a part of the human condition—but Christians are called to faith. And that faith is confidence in God, in the expectations that the mother of God proclaims in the Magnificat, that God is powerful and effective: “he has shown the strength of his arm, he has scattered the proud in their conceit, cast down the mighty from their thrones, and has lifted up the lowly.”

God will transform us, both ourselves into an active humility that does not shrink from witnessing to the truth, and our country into a place where violence and inequality are no longer acceptable.